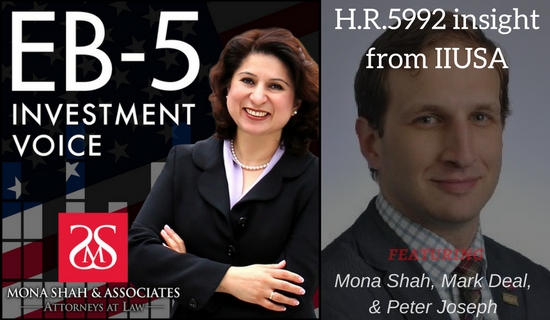 The American Job Creation and Investment Promotion Reform Act of 2016 (H.R.5992) was introduced to the 114th Congress recently.

The American Job Creation and Investment Promotion Reform Act of 2016(H.R.5992) was introduced to the 114th Congress recently. This pending bill introduced a lot of changes to the EB5 program. Some were expected, some are good, but there are a couple of points of concern. Peter D. Joseph joins Mona and Mark to talk about this new bill, what Invest In the USA (IIUSA) is doing, and how you can get involved.


Since 2010, Peter D. Joseph has served as the Executive Director of Invest In the USA. IIUSA is the national trade association for the EB-5 Regional Center Program. Under his leadership, IIUSA has grown to represent a vast majority of capital flowing through the EB-5 Program – while achieving advocacy, policy, and industry development goals by actively engaging in government and public affairs with an international reach.
As listeners of this show may already know, this program accounts for billions of direct investment dollars into the united states, creates tens of thousands of U.S. jobs and generating billions of dollars of tax dollars for the U.S. economy. We will know more about this new legislation and how it affects the EB-5 Program.

How Can I get Involved?

If you have questions about investment immigration, please reach out to Mona Shah & Associates.