How Litigation can help EB-5- Episode 93 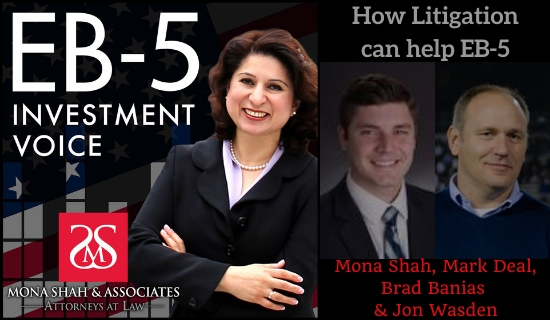 How Litigation can help EB-5- Episode 93

The current administration seems to be intentionally slowing down the adjudication process for EB-5. On this episode, Mona and Mark are joined by Brad Banias and Jon Wasden to discuss how they are leveraging litigation to address the egregious delays. Listen in for insight around what protects investors from government retaliation, how the USCIS funding mechanism is designed to support reasonable processing times, and why Wasden Banias proposes litigation as early as the six-month mark.

In 2016, USCIS reported that it took adjudicators approximately 6.2 hours to decide an I-526 petition. So, why is the agency making EB-5 applicants wait two to four full years for a decision? And how can we leverage litigation to change that?

Jon Wasden and Brad Banias are partners at Wasden Banias LLC. Both Jon and Brad represented USCIS as defense attorneys in federal court in their respective roles with the US Department of Justice’s Office of Immigration Litigation before transitioning to private practice where they focus on federal litigation related to employment-based immigration benefits. On this episode of EB-5 Investment Voice, Jon and Brad join Mona and Mark to explain why litigation has become a necessary part of doing business in the EB-5 program under the current administration.

Brad and Jon address immigrant investor concerns around the fear of retaliation and the cost of litigation, discussing the protections available to EB-5 applicants who sue the government and the expense associated with the process.  Listen in to understand why Brad and Jon feel comfortable filing delay suits at the six-month mark and learn how they argue against egregious delays to get better, faster decisions for their EB-5 clients.

USCIS Under the Trump Administration

The Fear of Retaliation

The Cost of Litigation