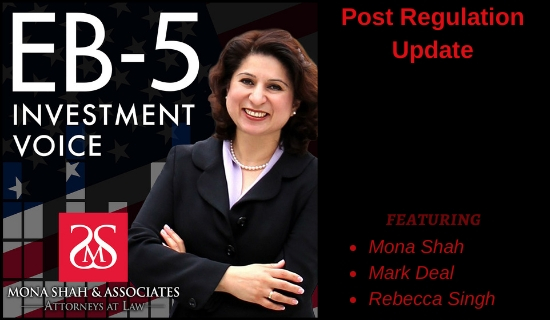 The new EB-5 regulations did, in fact, take effect on November 21st as planned. On this episode, Mona, Mark and Rebecca discuss the uncertainty in the program in a post-reg world and the lawsuit filed in response to the new rules. Listen in to understand what this litigation means for the EB-5 and how it might force Congress to take action around the proposed EB-5 legislation.

Leading up to the November 21st deadline, the lawyers at MSA did six months of work in three weeks, rushing to file EB-5 petitions for clients before the rules changed. But what has happened now that the new USCIS regulations have gone into effect? Has a complaint been filed against DHS in response, as predicted? What does that mean for investors who want to file today?

On this episode of EB-5 Investment Voice, Mona, Mark and Rebecca sit down to discuss the uncertainty surrounding EB-5 in the aftermath of the new regulations. Mona discusses the lawsuit filed by Florida EB-5 Investments in response to the new rules, sharing her take on the complaint’s claims that USCIS has exceeded its expertise and violated the 10th Amendment in taking on the TEA designation.

Mona, Mark and Rebecca go on to address the potential for a temporary restraining order (TRO) to suspend the new regulations and weigh in on the pros and cons of the current proposed legislation: The Relief Act and the EB-5 Reform and Integrity Act. Listen in for insight around the good things happening in EB-5, including the opening of chart B for adjustment of status applicants and the 10% increase in the number of EB-5 visas, and learn how the uncertainty in EB-5 is likely to impact you.

Confusion Around the New EB-5 Regs

What If You Want to File for EB-5 Today?

The Pros & Cons of the EB-5 Reform Bill