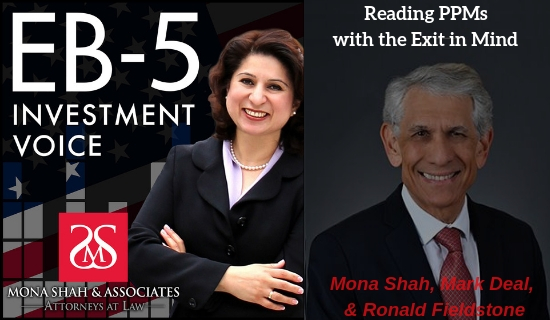 What should EB-5 investors look for in a PPM to ensure they’ll eventually get their money back? On this episode, Mona and Mark are joined by Ronald Fieldstone to discuss potential delays in capital repayment and the differences between the loan and preferred equity models. Listen in for insight around exiting a commercial note and learn how to choose a good project with a solid exit plan—even if you’re in a hurry to beat the November 21st deadline.

This is our first in a series of episodes where we analyze various Exit Plan options and what affects them.

Aspiring immigrant investors are in a rush to get into the EB-5 game before the rules change on November 21st. But what should they be looking for when it comes to an exit strategy? How can EB-5 investors compare the private placement memoranda (PPM) of various projects and choose one that ensures they will eventually get their money back?

Ronald Fieldstone is a partner is the Miami office of Saul, Ewing, Arnstein & Lehr, a firm with 400-plus attorneys serving businesses across the US and around the world. Ronald has experience representing developers as well as Regional Centers, and he is currently handling more than 300 EB-5 projects with a combined capital raise of $7B. On this episode of EB-5 Investment Voice, he joins Mona and Mark to discuss the ins and outs of exit plans. Ronald explains how the dramatic extension of adjudication times impacts the return of capital and why many developers intentionally delay repayment.

Ronald describes the role of a third-party loan administrator, the process of vetting a project developer, and the difference in exit plans for a loan versus a preferred equity model. Listen in to understand the challenges around exiting a convertible note and learn what investors and developers should consider leading up to the new regulations taking effect on November 21st.

The Five-Year Loan Before & After Retrogression

Why Developers May Delay Repayment

The Role of a Third-Party Loan Administrator

The Loan Model vs. Preferred Equity

How to Exit the Regional Center Equity Model

The Challenges Around Convertible Notes

Have a topic or question you would like covered ona future episode of EB-5 Investment Voice? Let us know!