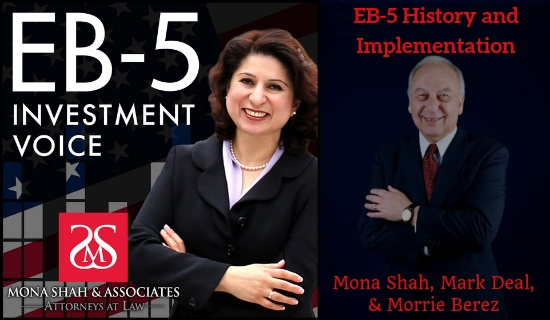 Curious how the EB-5 program has grown and evolved over time? Today, Mona and Mark are joined by former USCIS EB-5 Program Manager Morrie Berez to discuss the evolution of EB-5. Morrie describes the modest early days of the program, explaining why it was suspended for a time and how its regulations were established. Listen in for Morrie’s insight around USCIS Policy Memorandums, business development, and the issue of redeployment.

How did the EB-5 industry grow to generate up to $1B in immigrant investment capital and create thousands of jobs for US workers every year? What did the program look like when it began in 1990 and how has it evolved over time? What insight and advice can a former head of EB-5 offer those of us who are navigating the program today?

During Maurice (Morrie) Berez’s distinguished 35-year career in government, he spent seven years as the USCIS Headquarters EB-5 Program Manager and Chief Adjudications Officer. Under Morrie’s leadership, the program went from small and struggling to a thriving engine for foreign capital flow. Today, he joins Mona and Mark to discuss the evolution of the program, explaining how Regional Centers facilitated the growth of EB-5, how E-2 informed its regulations, and how he addressed the fraud that had temporarily shut the program down.

Morrie offers insight into the process behind Policy Memorandums, sharing how some are born of stakeholder concerns while others stem from an obvious need to clarify regulations. Listen in for Morrie’s advice on the best way to handle the issue of redeployment and learn how to educate adjudicators around the industry standards that impact your business!

The Early Days of EB-5

The Suspension of EB-5