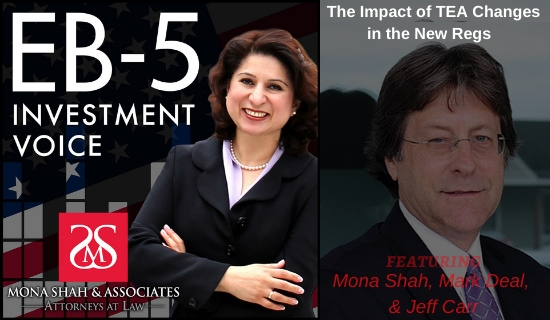 How will the new rules around Target Employment Areas (TEAs) impact the EB-5 program? On this episode, Mona and Mark are joined by Jeff Carr to explain the intent behind the changes to TEA designations and their potential unintended consequences. Listen in to understand how shifting the responsibility for determining TEA away from states to USCIS caseworkers will impact the program.

As of November 21, 2019, what constitutes a Targeted Employment Area in EB-5 will change dramatically and much fewer census tracks will qualify, making TEAs the exception rather than the rule. But will the changing standards for TEAs really bring economic growth to rural areas, as intended? What are the potential unintended consequences of the new regulations?

Jeff Carr is the President and Senior Economist at Economic & Policy Resources, Inc. With 35 years of experience as an analyst, he has developed EB-5 project business plans in 45 states and completed more than 225 economic impact studies. On this episode of EB-5 Investment Voice, Jeff joins Mona and Mark to discuss how the changes to TEA will impact the EB-5 program as a whole, explaining how the standards were designed to eliminate so-called ‘spaghetti diagrams’ and incentivize investment in rural areas—and why overall deal flow may decline as a result.

Jeff covers the challenges associated with making USCIS caseworkers responsible for determining what projects qualify for TEA, describing how this might impact urban projects and addressing the gray area around contiguous census tracks. Listen in for Jeff’s insight into the benefits of the REDYN economic model and learn the USCIS guidelines for what constitutes the principal location of a business with multiple sites for TEA purposes.

Why the TEA Guidelines Changed

Projects with Offices in Multiple Locations

The Benefits of the REDYN Economic Model