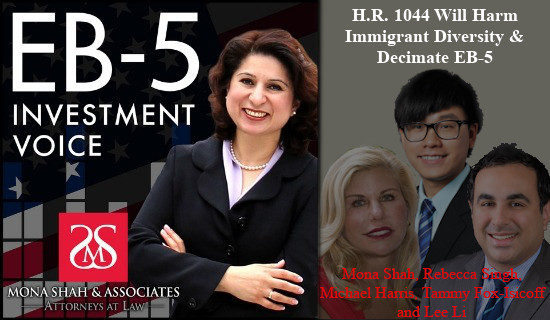 What is H.R.1044? And, what is going to be its impact on Employment-Based (EB) visas? On this episode, Mona, Rebecca and Mark are joined by Tammy Fox-Isicoff, Michael A. Harris, and Lee Li to discuss the specifics of the bill and its expected impact across all EB visa categories, particularly the EB-5 program. Listen in to understand how you may be impacted if this bill becomes law, and why it will cause great harm to U.S. immigration.

Supported by Big Tech, this Bill has garnered significant support in Washington by leaning on the industry’s lobbying prowess. The narrative surrounding the Bill only focuses on the short-terms gains for a sub-set of immigrants, while overlooking the large-scale and long-lasting harm and disruption that it will cause to Employment-Based immigration as a whole. And so, it is important to understand the specifics of the Bill (as passed by the Senate), the devastating impact it will have on the diversity of immigrants, the proportional allocation of EB visas across all categories, and how it will undermine the objectives of the EB-5 program – leaving it operational in name only.

Michael A. Harris is a Florida Bar Board Certified Specialist in Immigration and Nationality Law based in Miami, Florida, with a law practice centered in business and investment immigration. His awards include having an AV Preeminent Peer Rating from Martindale-Hubbell, as well as being named a Top EB-5 Immigration Lawyer in 2019 by eb5Investors.com, and named a Top Immigration Lawyer by Best Lawyers in 2020. Mr. Harris serves on the executive committee as a member of the board of directors of AILA South Florida, and is a member of the board certification committee on Immigration & Nationality Law for the Florida Bar. He has served as chair, co-chair, vice chair, and a member of numerous AILA South Florida committees. Mr. Harris received his Juris Doctor Degree from Nova Southeastern University in Ft. Lauderdale, Florida in 2007. Since 2012, he has managed his private law practice, and since 2015 has been Of Counsel to Diaz Reus, a top international law firm, in Miami. Mr. Harris has taken part in the representation of highly complex immigration matters, including a substantial practice involving the EB-5 Immigrant Investor Program.

Tammy Fox-Isicoff is a former Trial Attorney for the United States Immigration and Naturalization Service and Special Assistant United States Attorney. Tammy has been selected by Best Lawyers as the Best Lawyer in Immigration Law in S. Florida in 2012, 2016, 2019 and 2021. SuperLawyers has recognized Tammy as one of the top 50 women lawyers in Florida. Tammy holds an AV® Preeminent™ Peer Review RatedSM by Martindale-Hubbell® and has been continually listed in The Best Lawyers in America, Chambers Global, South Florida’s Top Lawyers, SuperLawyers and International Who’s Who of Corporate Lawyers The National Association of Distinguished Counsel has recognized Tammy as being in the top 1% of attorneys in the entire U.S.

Lee Li joined IIUSA in 2014 as a Policy Analyst. He leads the association’s research and data analytic initiatives, providing regular reports on USCIS processing trends, EB-5 visa usage, waiting line forecast, investor markets analyses, and more. In addition, he manages IIUSA’s extensive industry data library and develops a variety of interactive maps as well as data dashboards to inform EB-5 policy discussions such as reforming Targeted Employment Areas (TEA). Lee also led the publication of the latest peer-reviewed EB-5 economic impact study in collaboration with Western Washington University in 2018. As the administrator of the member portal, Lee is the unofficial “IIUSA tech Jedi.” Lee received a Master of Science in Government Analytics from Johns Hopkins University and holds a Master of Public Policy from Loyola University Chicago. Originally from China, he speaks Cantonese and Mandarin in addition to English.

Impact of the Bill: