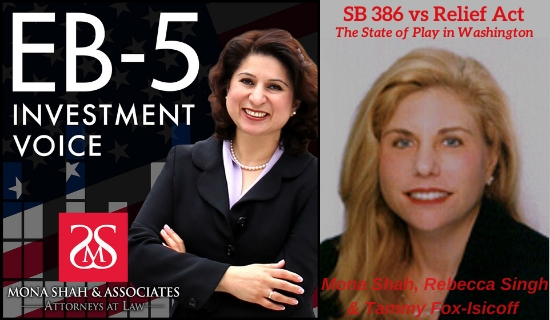 Draft legislation around immigration is currently making its way through Congress. On this episode, Mona and Mark are joined by Tammy Fox-Isicoff to discuss how each of the proposed bills would impact EB-5. Listen in for Tammy’s insight on the downside of SB 386 and learn how the RELIEF Act eliminates backlog and keeps families together.

The tech sector is advocating for SB 386, despite its failure to rectify the backlog crisis and its burden on Indian immigrants. In fact, SB 386 would largely end foreign direct investment in all 50 states should the legislation pass. So, what are the fundamentals of SB 386? How would this legislation change the EB-5 program?  And is there an alternative that addresses the shortcomings of SB 386?

Tammy Fox-Isicoff is a former trial attorney for the US Immigration and Naturalization Service and Special Assistant US Attorney. She was named Best Lawyer on Immigration Law in South Florida in 2012, 2016 and 2019. On this episode of EB-5 Investment Voice, Tammy joins Mona and Mark to discuss the proposed legislation that would impact the EB-5 program, including HB 1044, SB 386 and the RELIEF Act.

Tammy walks us through the fundamentals of SB 386, explaining how the bill eliminates per country quotas and how it would impact Indian immigrants—should EB-5 be included in the proposed legislation. She compares SB 386 with the RELIEF Act, describing how the latter both solves the backlog crisis and keeps families together. Listen in to understand what the immigration landscape might look like should SB 386 pass and learn what we can do as an industry to advocate for the RELIEF Act.

The Fundamentals of SB 386

The Disadvantages of SB 386

The Fundamentals of the RELIEF Act

The Consequences of Passing SB 386