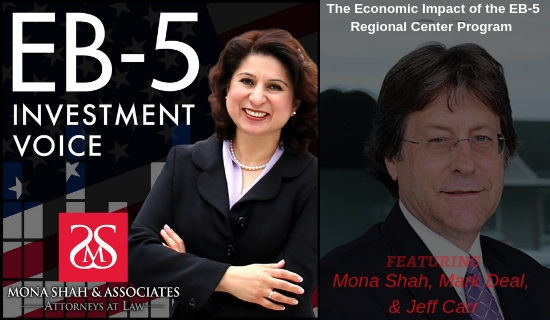 Due to inaction in Washington, the EB-5 Regional Center program remains in limbo. Lawmakers don’t seem to fully understand the economic opportunities or the job creation they put at risk by failing to extend the program and increase the number of available visas. For this reason, Jeff Carr and his team at Economic & Policy Resources, Inc. (EPR) collaborated with the EB-5 Investment Coalition and IIUSA to generate a report detailing the economic value and job creation impacts of project capital investment activity under the EB-5 program.

Jeff serves as the President and Senior Economist at EPR. He has 35 years of experience as an economist-analyst, completing 225-plus economic impact studies and developing EB-5 project business plans in 45 states. Today, he joins Mona and Mark to discuss the role of an economist in assessing the economic impact of the EB-5 Regional Center program and share the findings of the newly published EPR report.

Jeff offers insight around the source of the data used in the study as well as the economic model he employed to ensure the accuracy of his assessment. Listen in for a breakdown of the report’s findings and learn about the wide range of industries and regions of the country that benefit from the $11 billion in capital investment and 355,200 jobs generated by EB-5 Regional Center projects in the US.

The Role of the Economist in EB-5

The Impetus for EPR Report

The Industries & Regions that Benefit from EB-5

The Advantages of the REDYN Economic Model

The Source of the Data for the EPR Report

A Call to Action for Lawmakers