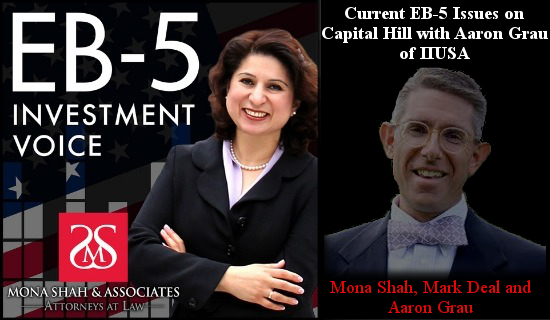 What are the concerns that Congress has expressed regarding the EB-5 Program and how can the Program benefit the economy in the wake of the pandemic? On this episode, Mona and Mark are joined by Aaron Grau of IIUSA to discuss what is happening on Capital Hill as Congress considers the future of the EB-5 Program. Listen in to understand the integrity measures some lawmakers have recommended be implemented in the EB-5 Program and how IIUSA continues to emphasize the invaluable benefits that the EB-5 industry provides to the economy.

The value of a trade association lies in its ability to make a substantive impact on perception and policy. For the EB-5 program, IIUSA is the organization tasked with communicating stakeholder priorities and emphasizing the role the program can play in bolstering the economy, ultimately influencing EB-5 policy on Capitol Hill. So, what potential legislative changes to the EB-5 Program does IIUSA intend to support? What positive signs can be seen in congressional rhetoric and perspective on the EB-5 industry? And how does IIUSA play a part?

Aaron Grau is the Executive Director of IIUSA, the national membership-based nonprofit for the EB-5 Regional Center Program. Today, he joins Mona and Mark to discuss the current status of EB-5 and offer insights into the current congressional attitude toward the program. He shares the monumental impact that EB-5 has had on the U.S. economy and how, as we look forward to a world after COVID, the EB-5 Program can provide a variety of benefits.

Where is the EB-5 Industry Now?

Ongoing Discussions of Modification to the EB-5 Program

Recent News and Impacts to the Industry

What the Future May Hold for the EB-5 Program