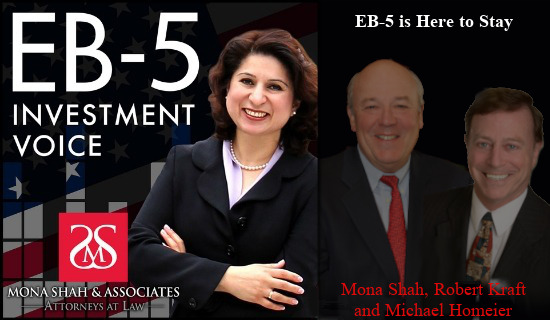 With so much uncertainty surrounding the future of the EB-5 industry, questions about reauthorization, congressional reform and bipartisan agendas have been the primary topics in EB-5 news lately. As the reauthorization deadline of the EB-5 Regional Center Program slowly inches closer (June 30, 2020), the press has once again started to overstate their concerns about the expiration of the EB-5 program. Mona is joined by Bob Kraft (President of IIUSA) and Michael Homeier (Member of the Securities Round Table) to discuss the legitimacy of these concerns and the developments surrounding them. Listen in as the industry experts discuss how the EB-5 program was decoupled from the spending bill (and how it in fact is a positive measure for the industry), the recent developments on the hill surrounding the integrity reforms and why they think EB-5 is here to stay.

Michael G. Homeier practices in the area of general business, corporate, securities, transactional, and business financing law. With over 30 years’ experience in the corporate and business transactional field (11 in EB-5), both as in-house corporate counsel and with private law firms, Michael brings a deep level of legal knowledge and expertise to the EB-5 industry.  With his prior firm Homeier Law PC, Michael has worked on over 400 EB-5 matters, representing a large number of regional centers and securities issuers in the EB-5 program, and assisting them with the structuring of their projects as well as the negotiation and drafting of corporate and securities documents relevant to the EB-5 program, such as private placement memoranda (PPMs), investor questionnaires, operating agreements, limited liability agreements, loan agreements, equity agreements, subscription agreements, and escrow agreements.  In addition to numerous engagements as a university law professor, Michael also actively participates in public speaking engagements, both in the EB-5, crowdfunding, and blockchain/token, and business law arenas, and as an inspirational speaker to teenage and young adult cancer survivors (as one himself) on finding post-treatment life success.  Michael received his J.D. from the University of Southern California Gould School of Law, and his B.A. from The University of California, Los Angeles. Michael is a member of the State Bar of California, the American Immigration Lawyers Association, IIUSA (Invest in the USA, the EB-5 trade organization), the EB-5 Securities Roundtable, the United States Naval Institute, SAG/AFTRA, and the Cancer Survivors Network.

Robert W. Kraft is the CEO and Chairman of FirstPathway Partners (FPP) , and President of IIUSA’s Board of Directors – the national trade association for the EB-5 Regional Center Program – where he has been re-elected by Regional Center peers for a fourth term. His focus on the establishment and growth of FPP and their mission to become the leading EB-5 Regional Center practitioner in the United States has helped set them apart from other regional centers. Through FPP, Mr. Kraft has earned praise for his effort towards driving economic growth and the job creation impact he has influenced throughout southeastern Wisconsin. He has been characterized as an entrepreneur, driving growth as a result of his ability to bridge international culture, trade, and economic exchange.