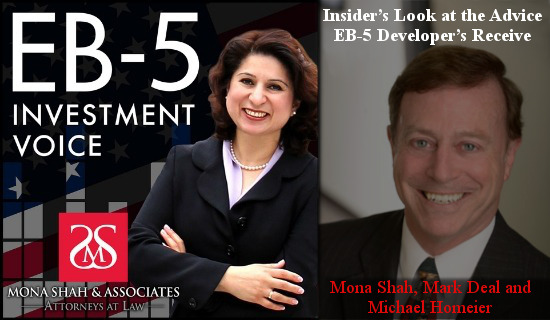 As EB-5 developers confront the current economic reality, what advice are they receiving from EB-5 experts and securities attorneys? On this episode, Mona and Mark are joined by Michael Homeier from Law Office of Michael G. Homeier, PC to discuss the common questions developers ask in regards to EB-5 funded projects and the concerns that have arisen during the pandemic. Listen in to understand the changes developers may be making to EB-5 projects and whether they have the authority to make these changes.

Michael G. Homeier is a leader in EB-5, investment crowdfunding, and blockchain/token-related corporate and securities transactions, and with his prior firm has represented a number of EB-5 regional centers as well as private EB-5 clients on over 400 regional center and EB-5 securities offering projects to date. His firm is devoted exclusively to corporate and business transactional law, including securities (EB-5, crowdfunding and blockchain/token). Michael G. Homeier routinely presents at EB-5 industry events, including AILA/IIUSA combined conferences.

Today, he joins Mona and Mark to discuss how project developers and issuers have a substantial amount of control over EB-5 projects but are limited by securities laws. He emphasizes the importance of engaging experienced attorneys in the field of EB-5 immigration and securities law to both prepare the project’s offering documents as well as to provide sound advice on what changes can be made to a project during a crisis.

QUESTION: What if a project developer needs to change the management of the project and sell off company assets that were originally used as collateral for the EB-5 loan from the NCE to the JCE?

QUESTION: How much power does the project developer have over the project, and can the Regional Center help protect the interests of the investors?

QUESTION: So how does a developer find the right regional center for their project?

QUESTION: If it is time to pay back investors and the project has sufficient capital but is unwilling to repay during the pandemic due to the state of the economy, must they still do so?

QUESTION: Can an investor who wants to withdraw from the project request a return of their capital prior to the agreed-upon term?