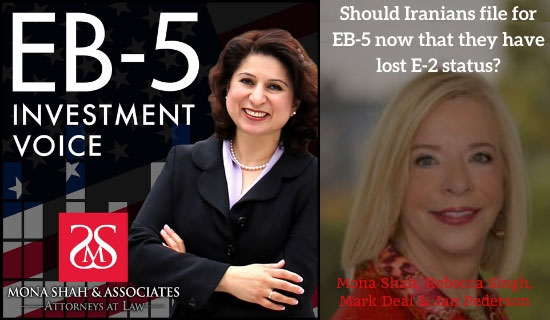 On January 2, 2020, President Trump unilaterally terminated the Treaty of Amity between the US and Iran. On this episode, Mona, Mark, and Rebecca are joined by Jan Pederson to discuss what that means for Iranian nationals with E-2 investor visas. Listen in to understand the process of obtaining a travel ban waiver and learn how Iranian immigrant investors might leverage the EB-5 program as an alternate means of securing a visa.

On January 2, 2020, President Trump terminated the Treaty of Amity between the US and Iran, an agreement that had been in effect since 1955. What does that mean for Iranian nationals with an E-2 investor visa? And is EB-5 a feasible option for Iranians who want to remain in or immigrate to the US?

Jan Pederson is a Senior Attorney with Maggio Kattar Nahajzer + Alexander and internationally-recognized speaker on the EB-5 program. Jan has 30-plus years of experience practicing immigration law in the US, Italy and France, and she was selected as a Leading Lawyer in Washington, DC, by The Washington Post. On this episode of EB-5 Investment Voice, Jan joins Mona, Mark and Rebecca to discuss the termination of the E-1 and E-2 investor visa for Iranians.

Jan shares the list of travel ban countries and explains who is exempt from the ban, including certain student visa holders and individuals with dual citizenship. She also walks us through the process of obtaining a travel ban waiver, discussing how she supports clients in marshalling political support from the area where they are investing. Listen in for Jan’s insight on the implications of terminating the Treaty of Amity and learn whether EB-5 is a viable option for Iranian investors.

Exemptions to the Travel Ban for Students

Other Exemptions to the Travel Ban

The Benefits of Dual Citizenship

Making a Case for the National Interest