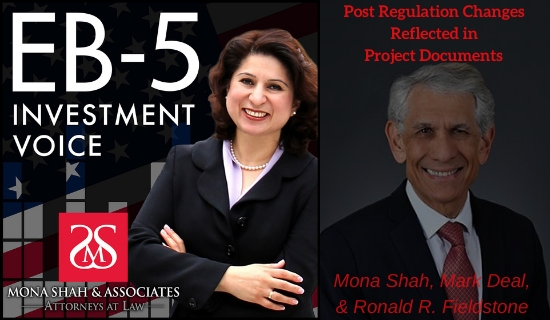 The increase in minimum investment from $500K to $900K has fundamentally changed the EB-5 program, and our project documents must be modified to reflect those changes. On this episode, Mona and Mark are joined by Ronald R. Fieldstone to discuss the ins and outs of updating project documents in light of the new rules. Listen in for insight into the rising administrative fees, the pressure for projects to provide a higher rate of return, and the availability of TEA projects on the market right now.

A number of EB-5 projects raised capital from foreign investors at the $500K minimum prior to the regulations taking effect last November. Now, they are looking for additional investors at the $900K level. How should the project documents be updated to reflect the regulatory changes? What disclosures should be included in any modified or new offerings?

Ronald R. Fieldstone is a Partner at Saul Ewing Arnstein & Lehr and serves as the Chair of their Global Immigration and Foreign Investment Practice. He represents both developers and Regional Centers in EB-5 matters, currently handling more than 350 EB-5 projects with a combined capital raise of more than $8B. On this episode of EB-5 Investment Voice, Ronnie joins Mona and Mark to discuss the necessary changes to project documents in light of the new regulations.

Ronnie explains the rules around administrative or management fees, offering insight into how much those fees have increased since November 2019 and why agents may be charging more. He also addresses the pressure for projects to offer $900K-level investors a higher rate of return and weighs in on the small number of TEA projects on the market right now. Listen in for Ronnie’s advice on updating the project summary, economic report and business plan with the appropriate disclosures—and learn whether it’s best to add an addendum to an existing PPM or simply draft a new one.

A Higher Rate of Return

Availability of Projects Since November

Uncertainty Around the TEA Determination