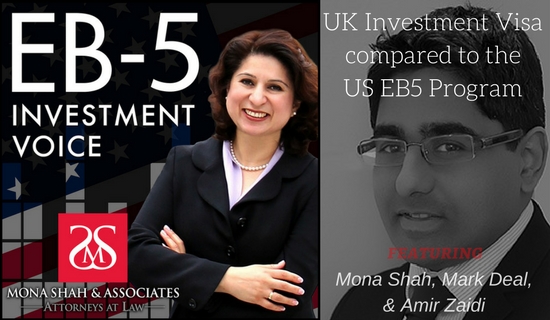 The U.S. EB5 program isn’t the only program for immigrating investors to consider.

How does the EB5 program compare with the U.K.’s Investment Visa?
Join us for a discussion with Amir Zaidi on how the U.K. Investment Visa differs from the U.S. EB-5 program.

Like the United States, the United Kingdom welcomes investment and business development from foreign nationals. The U.K. offers two programs which are similar to the EB-5 program in the United State – the Investor Visa and the Entrepreneur Visa. Both visa types are unique – from the investment amount, to the amount of involvement required, and the number of direct employee hires – have attract foreign investors for different reasons. Despite similarities with the U.S. program, there are very clear differences between the two programs, most notably the investigation into the source of funds and the amount of time need to get visa approval. Despite the positive and negative aspects each have to offer, ultimately the decision on which country to invest in and what type of investment to make is very personal and can only be made by the investor – the dream they have for themselves and their families is the most important thing to remember, not what a visa has to offer.

Host Mona Shah and co-host Mark Deal talk with Amir Zaidi, a London based immigration attorney, about the United Kingdom’s Investor and Entrepreneur Visa program, the positive and negative aspects of them, and how they compare to the EB-5 Program in the United States.
Guest Amir Zaidi introduces himself and discusses his background and experience in the immigration field.
90-95% of immigrant investors are concerned about their children. They want the best educational opportunities and to provide a better and safer life for their family; they also want to ensure that the money they have earned is safe.
Mr. Zaidi explains the Investor Visa. This requires a £2 million (approximately $2.8 million USD) investment into almost anything (such as, an existing corporation, a business start-up, or government bonds), as long as the investment in based in the United Kingdom. There is essentially no risk associated with the Investor Visa, requires no job creation, and is a passive investment.
Mona explains a major difference between the U.K. and the U.S., is the number of EB-5 programs available (700 currently).
The adjudication processing time in the United Kingdom depends largely on where the investment is coming from but is very quick regardless. Generally, visas are processed within 5 days but may take as long as 20-40 day. Under some circumstances, the visa can be expedited and completed within 24-hours.
The most popular countries for Investor Visas are: China, Russia, the United States, Hong Kong, Pakistan, India, Egypt, Canada, and Nigeria.
Entrepreneur Visas is meant for those who want to set up or run a business in the U.K. and is the most similar to the EB-5 program. This program requires active participation from the investor including: a £200,000 investment, creation of two (2) jobs within three years, and the investor must be a proficient English speaker.
Because of the language requirement, the highest number of applications come from countries where English is the official language or is the primarily language used in education. The most popular countries for Entrepreneur Visa are: the United States, Canada, Australia, Pakistan, India, Egypt, and Nigeria.
There are many differences between the programs in the United Kingdom and the United States but the decision of which country to apply to is personal. Foreign nationals who want to live in the United States are willing to accept longer adjudication times and with placing the with having their funds at risk. There is not competition for investors seen like there is between Canada and the United States.