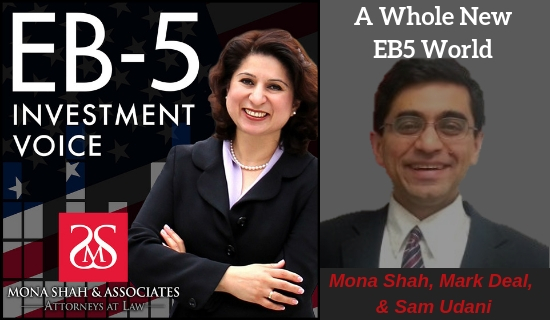 We can all agree that the landscape of EB-5 will look a lot different after November 21st. On this episode, Mona and Mark are joined by Sam Udani to discuss his vision of the post-reg EB-5 world. Listen in for Sam’s take on pending EB-5 legislation and the changing profile of projects and investors in light of the new regs.

When the new regulations take effect in November, the world of EB-5 will change dramatically. Sam Udani recently published a controversial article around his vision of this new world. But before you argue with Sam’s perspective, know that he has spent the last 22 years cultivating relationships with insider sources and his previous predictions have been remarkably accurate.

Sam is the founder and publisher of ILW Immigration Daily, an online newspaper dedicated to immigration law. Founded in 1999, ILW produces thousands of articles every year for its 35K-plus subscribers, and the organization’s marketing arm has hosted 300 events in 14 countries over the last seven years. On this episode of EB-5 Investment Voice, Sam joins Mona and Mark to explain the accuracy of his predictions around the new regulations and discuss his recent article, “A Whole New EB-5 World.”

Sam shares his take on the pending legislation, explaining why he is skeptical about the compromise bill and how Senator Grassley’s proposal will impact entrepreneurial projects. He weighs in on the changing role of large urban developers in the new world of EB-5 and the likely domination of rural projects after November 21st. Listen in to understand how the increase in denials might influence the backlog crisis and learn what the new EB-5 investor will look like once the new regs go into effect.

Sam’s Accurate Predictions on the Regs

Mona and Sam’s Take on the Pending Legislation

The Changing Profile of Projects & Investors

How USCIS Denials Inform the Backlog

Sam’s Vision of the Future of EB-5