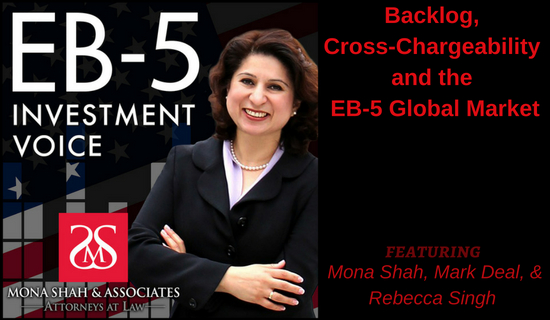 In the aftermath of Charlie Oppenheim’s recent keynote at the IIUSA’s EB-5 Advocacy Conference in DC, many questions have surfaced around retrogression, backlog and cross-chargeability. Today, Mona, Mark and Rebecca explain the distinction between the terms retrogression and backlog and review the countries that are likely to face a backlog by Summer 2019. They discuss when and how to apply cross-chargeability and the best places to find investors in the global EB-5 market.

EB-5 is, indeed, a global market, seeing that investors from all over the world are interested in becoming permanent residents of the US. How do developers go about finding those investors—and vice versa? Where are the most promising hubs for EB-5? And what do potential investors need to know about the current and forthcoming backlogs in countries like China, Vietnam, India, Brazil, Taiwan and South Korea?

Mona, Mark and Rebecca begin by addressing the confusion regarding backlogs and retrogression that has surfaced since the recent EB-5 Advocacy Conference in DC, explaining the difference between the two terms and reviewing which countries are likely to face a backlog by the summer of 2019. They go on to discuss the concept of cross-chargeability, describing the circumstances under which it may be applied as well as the other EB-5 guidelines set forth in the USCIS Adjudicator’s Field Manual.

Finally, Mona, Mark and Rebecca speak to the issue of EB-5 hubs, reviewing the best places for developers to connect with investors in the global market. They break the world down into regions and share the benefit of marketing in cities such as Dubai, London, Moscow and Singapore.

Find Mona, Rebecca, and other from Mona Shah & Associates at the Global Investment Immigration Summit in London, UK on June 21&22, 2018.