Should EB-5 Projects be Allowed a Voice? – Episode 171 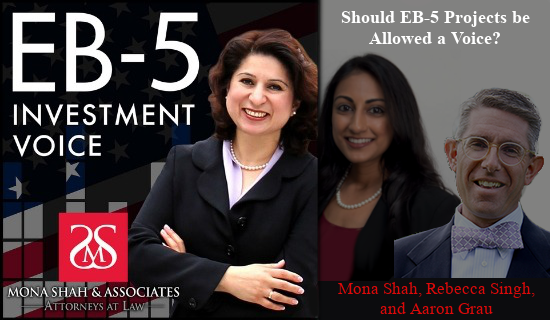 Should EB-5 Projects be Allowed a Voice? – Episode 171

EB-5 visas are distinct from other paths of immigration in many ways. Particularly, an EB-5 investment has a wide reach and impacts not only the immigrant themself, but also the business, employment area, industry, and entire communities. We have seen extensive delays and confusion from USCIS, who can struggle to understand both the law and projects. Often times, the solution is a simple line of communication to the Service.

On today’s episode of EB-5 Investment Voice, Mona and Rebecca are joined by Aaron Grau, Executive Director of Invest In the USA (IIUSA). IIUSA was instrumental in the recent settlement agreement which established quarterly meetings with USCIS officials. But is there more USCIS should do to make sure all voices are heard?

Listen below as the team discuss topics such as whether USCIS is equipped to handle business documentation, Congress’s role in fair adjudication, and their ambitious desire to see the EB-5 visa move out of the Employment Based category.

Below is a snippet of the conversation:

Mona: If we do actually advocate something, Aaron, how does that affect USCIS? Aren’t they supposed to be independent? Are they allowed to listen to a Democrat or Republican senator? How does that work?

Aaron: Well, I mean, absolutely they should listen to Congress. We do have separation of powers… Congress has the purse strings, and if we’re able to make the case, for example, in an oversight hearing, that USCIS needs to do X, Y, and Z, Congress has the ability to tug on those purse strings to make sure that those program improvements happen.

Mona: …In the meantime, what can a project do if they are facing frustration through, say, a lack of an understanding from USCIS? Do you have any short term solutions?

Aaron: … The alternative is litigation, right? The alternative is to file a lawsuit. And it is a double-edged sword. Those lawsuits are double-edged because they become a necessary tool to get done what has to happen. At the same time, it hardens USCIS for continued communications because it feels that no matter what it does, it’s going to get sued. And so the lawsuits beget the lack of communication. The lack of communication begets lawsuits. And around and around and around we go.

Aaron Grau is the Executive Director of IIUSA, the national membership-based nonprofit for the EB-5 Regional Center Program. To date, IIUSA represents 200+ Regional Center members and 120+ Service Provider members across the country serving 47 states/territories. Regional Centers account for billions of dollars in EB-5 capital formation. Concretely, our work has empowered our members to create tens of thousands of jobs in a wide range of industries and American communities, generating over $32 billion dollars in foreign direct investment at no cost to the U.S. tax payer.