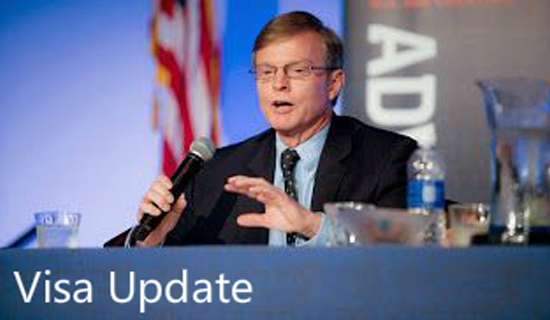 May 6, 2019, at the IIUSA EB-5 Advocacy Conference in Washington DC, there were no real surprises from Charlie Oppenheim, Chief of the Visa Controls Office at the US Department of State. However, he confirmed that India will definitely have its own final action date by June or early July of 2019. This information has not been accurately represented by many RC’s marketing in India and the UAE, resulting in ebbs and flows in the industry since last October.

What is a Final Action Date?

A final action date (FAD) marks the end of a “current visa” status for a country, indicating a backlog. It does not affect the project. Most countries do not have a FAD indicating that visas are current.  Countries with a FAD results in an investor only being eligible for the green card (adjustment of status or consular processing) once their priority date has become available.

In March 2019 during a speech with AILA, Charlie stated that he no longer predicted India would hit a backlog any time soon due to a decline in demand following the government shutdown and consequently the regional center reauthorization gap. However, due to a sudden increase in visa issuances at the subsequent Indian consulates, Charlie now predicts that the State Department will in fact impose a FAD for India no later than early July 2019. Once a FAD has been imposed, the backlog will likely temporally regress to China’s date. At the start of the next fiscal year (October 2019) the date will jump to sometime in mid-2017. These dates affect cases filed after May 6, 2019. The worst-case scenario would be a total wait of 8.4 years for a visa, while the best-case scenario being 3-4 years.

Brazil, South Korea and Taiwan will remain current for the remainder of FY2019.

For China and Vietnam:

Charlie was asked about the EB-3 /2 backlog, he predicted that the visa backlog for EB-3 would exceed 50 years (therefore comparing with the 8.4 years for the waiting time for EB-5 for Indian nationals, EB-5 is still a relatively and significantly a more attractive route.)

How the backlog numbers would change if the dependents were taken out of the country quota:

The present figures include the visa numbers for entire families. There would be major difference if the State Department counted the investors only, for example, of the numbers for India, only 41% constitute the principal applicant with the remaining 59% comprising of the family members.  If the family members were taken out of the quota count, there would be no backlog.

Percentage of Principal applicants per country (with dependents)

Filing in an Expedited Project:

In Conclusion: Charlie’s revelations confirmed what many of us have practitioners have suspected.  Unfortunately, not all regional centers who have been marketing overseas have not been forthcoming with this likely development. Whereas, EB-5 remains the fastest route to U.S. citizenship, investors should be aware of current timelines.  IIUSA and practitioners like Ira Kurzban are vigorously working towards removing the dependents from the visa count.