The Economic Impact of the EB-5 Regional Center Program 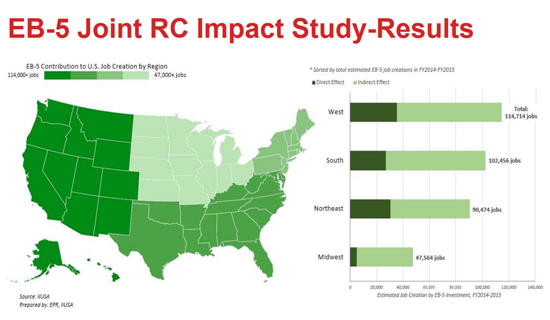 The Economic Impact of the EB-5 Regional Center Program

On March 14, 2019, Economic & Policy Resources, in conjunction with the EB-5 Investment Coalition and Invest in the USA (IIUSA), released the most comprehensive report on the economic and employment impacts of the EB-5 Program up to date. The report, entitled Assessment of the Economic Value and Job Creation Impacts of Project Capital Investment Activity under the EB-5 Program, found a total of $10.98 billion of capital investment in EB-5 projects through Regional Centers made between FY2014 and FY2015 alone throughout the U.S. supported more than 355,200 U.S. jobs, roughly 6 percent of all job gains over the two-year period. These particular years were chosen as subject studies because the years represent a time prior to the visa count inadequacy and a constant program sunset that causes rush filings that might taint the verifiable and hard project data obtained from the mandatory annual I-924A Regional Center registration shared by USCIS pursuant to a Freedom of Information Act request.

The almost $11 billion in capital investments represented approximately 2% of all foreign direct investments (FDI) into the U.S. economy during FY2014-2015. The amount does not include investments made into direct projects or direct-pooled projects, nor does it include the ongoing operations of any project, tenant ongoing businesses or the substantial economic activities conducted by the EB-5 investors themselves when they settle in the U.S., due to unavailability to secure and verify such information. However, we can justifiably assume that the $11 billion figure presented by this report is relatively low compared to the actual FDI resulting from the EB-5 Program. Taking into account the excluded jobs, the real job creation between FY2014-2015 through the Program most likely also well exceeds the conservatively reported 355,200.

In terms of regional impact, whilst critics always claim that the Program has been taken advantage of by deep-pocket New-York-City developers on glitzy projects, it is important to note that the Midwest experienced high rates of job growth through the Program via interconnected supply chains and resultant consumer spending. A project built in downtown Miami does not mean all job creation will be allocated there, as the steel and other construction materials are not fabricated there, but rather in the Midwest. In fact, nearly nine out of ten indirect jobs created in the Midwest are a result of projects located in the Northeast, West or South. The increase in the economic output of these regions due to EB-5 investment can be seen below:

As expected, the report found that real estate development continued to be the preferred method of EB-5 investment, with two-thirds of EB-5 funds utilized by the construction sector. However, the Program also supported a wide variety of other industries, including wholesale trade, healthcare, manufacturing, educational services, and arts, entertainment and recreation.

The Program has suffered significantly from misunderstanding and misinformation on its contribution to the U.S. economy through media emphasis on the few fraud cases against thousands of viable projects.  Senator Grassley on multiple occasions has called for the program to be terminated altogether, without respect to the potential detriment to the investors, projects, FDI or U.S. jobs. It is time to raise the general awareness on Capitol Hill of the economic impact of the EB-5 program and for the latter to take speedy action on a true and workable reform to ensure better and sustainable development of EB-5.

For more information and a detailed discussion on the report, please see the link below for access to the EB-5 Investment Voice podcast episode wherein Mona Shah, Esq., Principal Attorney of Mona Shah and Associates Global, invited Jeff Carr, President and Senior Economist of Economic & Policy Resources, to provide insight on the issue and what an economic report means to a project: https://mshahlaw.com/the-economic-impact-of-the-eb-5-regional-center-program-with-jeff-carr/. The full report is accessible here.

Hermione Krumm, Esq. is an associate attorney with Mona Shah and Associates Global. Hermione’s practice focuses on corporate and securities matters for issuers and developers seeking financing under the EB-5 program. She writes and comments frequently on current business and immigration issues. Her articles have been published by LexisNexis, ILW, EB-5info, EB-5 Supermarket, etc. Hermione received her LL.B. (Hons) from the University of Manchester School of Law (UK), and obtained her LL.M. from Cornell Law School. Hermione speaks fluent English, Mandarin and Cantonese.