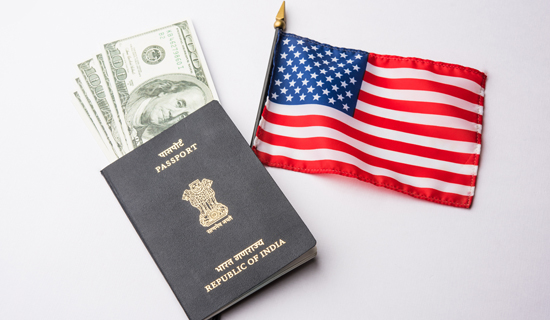 Recent trends in EB-5 investment has seen a huge interest from India especially among H-1B professionals. This is largely due to the uncertainty surrounding America’s largest guest worker visa, the H-1B. On April 6, 2018, U.S. Citizenship and Immigration Services (USCIS) announced that the congressionally mandated H-1B visa cap for fiscal year 2019 had been reached within only five days after the agency began accepting applications. Yet again, the fates of many professionals and skilled workers in the US remain uncertain, driving interest in the EB-5 visa program in an effort to attain security.

The H-1B visa is America’s largest guest worker visa, allowing American companies to employ skilled foreign workers in specialty occupations that require theoretical or technical expertise. These are often specialized jobs that can be challenging to fill. It has benefited the tech industry enormously, and other sectors, including health care, science, and finance, have also used it to fill gaps in their workforces. The H1-B candidate must have at least a bachelor’s degree. Once approved, H-1B visa holders are entitled to legally work in the U.S. for up to 6 years, with the possibility of extensions.

It is a popular visa, but the applications far outweigh visa numbers. This year, like last, hundreds of thousands of applicants will be disappointed. In 2018 there were 336,107 petitions for only 65,000 visas for the general category and 20,000 visas for the advanced degree exemption; only 197,129 were granted approval.[1] The applications were finally chosen randomly through a lottery system.

The H-1B skilled worker visa program has been traditionally popular among Indian professionals. In fact, India is the country of origin for more than 80 percent of H-1B recipients[2], amongst which, many are in the technology sector, ranging from software engineers to computer programmers. The companies that bring in the most H-1B workers, however, are not Silicon Valley tech firms but IT services firms, many based in India, that specialize in consulting or outsourcing. These companies, which include Tata Consultancy Services, Cognizant, Infosys, Wipro, Accenture, IBM India, and Deloitte, are contracted by other companies to do IT work. According to an analysis by Ronil Hira, a professor of public policy at Howard University, in 2014 nearly one-third of new H-1B visas went to 13 of these so-called “outsourcers.” (Tata received the most visas, with 5,650, while Amazon, the tech company with the highest number, got 877.)[3]

Critics of the program argue that IT service companies tend to hire H-1B workers for lower-paying entry-level work. For example, Axios reported that 72.4% of Tata’s H-1B visa filings were for jobs paying between $60,000–$70,000 a year.[4] Companies like Amazon, Apple, Facebook, Google, and Microsoft mostly filed for jobs that paid well above $100,000.[5]

According to a report published by statista, the No.1 industry that filed most work visa applications in FY 2016 was computer systems design and related services, counting 336,500 among all 399,349 petitions.[6]

Recent years have shown the demand for H-1B visas soar, while far outstripping supply. On April 18, 2017, President Trump signed an executive order that put H-1B and similar programs under new scrutiny. Titled “Buy American and Hire American,” it directs federal agencies to review whether existing policies adequately prioritize American products and protect American workers. This was also reflected in USCIS’ stringent adjudication of H-1B petitions, as seen by last year’s wholesale issuance of Request for Evidence (RFE) Notices and Notices of Intent to Deny (NOIDs). As a result, H-1B visas are increasingly difficult to obtain.

Difficulties for Spouses of H-1B Holders:

The difficulty surrounding skilled foreign workers has also extended to the spouses and dependents of H-1B holders (H-4 visa holders).  Since President Trump took office, rumor has it that the Department of Homeland Security (DHS) intends to strip H-1B holder’s spouses of work authorization. It is true that for many years since the H-4 visa program inception, H-4 visa holders had not been provided with any work authorization. This changed under the Obama Administration, on May 26, 2015, when USCIS passed the Employment Authorization for Certain H-4 Dependent Spouses rule.

Soon after the H-4 Visa Employment Authorization Document (EAD) Rule was enacted, thousands of H-4 spouses applied for H-4 visa EADs and received their first chance to work in the U.S. Recent data from the U.S. Department of State shows that the number of H-4 visa recipients increased from 47,206 in 1997 to 136,393 in 2017. Most of these visas have been consistently allocated to family members from India, nearing 118,000 in 2017, which constitutes 86 percent of all H-4 visa recipients in that year.

One might argue allowing spouses of H-1B holders to work makes the U.S. more competitive.  For example, when employers seek to attract talented foreign nationals to work for them, their spouses may continue to nurture their own careers, thus making any job offer which includes the ability of family members to work more appealing. This, in turn, has brought the U.S. in line with other Western countries that compete to attract highly skilled workers. Evidence has shown that immigrant scientists and engineers are more likely to choose a country where their immediate family members are welcome.[7] Further, with many H-4 spouses being female, the ability to work empowers women to contribute their skills to the American economy while ensuring the wellbeing of their families – this is especially important and concurrent with the #MeToo and #EqualPayforEqualWork movement.

The Trump administration, however, clearly has a different agenda in mind. On December 14, 2017, after widespread speculation, DHS published an agenda item “Removing H-4 Dependent Spouses from the Class of Aliens Eligible for Employment Authorization”[8] in the Fall 2017 regulatory agenda, intending to revoke the employment eligibility of H-4 dependent spouses. The proposed regulation is reported to need further revision and finalization is expected by June 2018.

Backlogs in other Immigrant Categories:

Another factor which has pushed foreign talents, especially those from India, to consider filing for EB-5 is undoubtedly the massive backlog in the EB-2 and EB-3 immigrant visa categories. EB-2 visas are ideal for professionals with advanced degrees, or exceptional ability. EB-3 visas are for foreign skilled workers, professionals or certain other workers. While historically the H-1B to EB-2/EB-3 transition might be a viable option, the long wait time in EB-2 (currently anticipated to be 11+ years[9]) and EB-3 (currently anticipated to be 12+ years[10]) to obtain a green card, which is only exacerbating throughout time, has rendered it nearly impossible.

Trump’s “Buy American and Hire American” order aimed to address some of the concerns surrounding the H-1B visa system. However, how far it will have a chilling effect on high-skilled immigration — and on the economy remains to be seen. In the short term, however, the changes or proposed changes in the H-1B and H-4 realm, coupled with the severe backlog in EB-2 and EB-3, and the noise around family-based immigration, have undoubtedly steered Indian nationals away from the skilled worker route to immigrate into the U.S., towards EB-5, as shown by the growing numbers of EB-5 investors coming from India.

Mona, an adjunct professor at Baruch College, CUNY University, has authored numerous articles, a published book for investors, co-edited EB-5 Gateway (BLS) and is a recommended author with Lexis Practice Advisor. Mona is regularly invited to speak worldwide, has been interviewed by mainstream news channels, including Fox Business News, Al Jazeera and quoted in major newspapers, including the New York Times.  Mona also hosts the first podcast series on EB-5, with over 55 podcast episodes.

Hermione M. Krumm, Esq. is an associate attorney with Mona Shah and Associates Global. Hermione works with EB-5, corporate, merger and acquisition (M&A), intellectual property and foreign direct investment (FDI) matters involving China, the UK and the US. Hermione writes and comments frequently on current business and immigration issues. Her articles have been published by LexisNexis, ILW, EB-5info, EB-5 Supermarket, etc. Hermione received her LL.B. (Hons) from the University of Manchester School of Law (UK), and obtained her LL.M. from Cornell Law School. Hermione speaks fluent English, Mandarin and Cantonese.