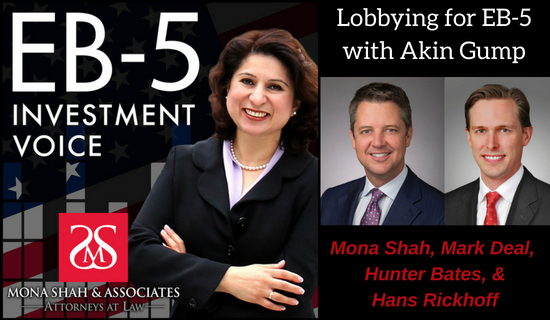 Lobby groups have spent the last several years working to pass a long-term EB-5 reform and reauthorization package. Today, Mark and Mona are joined by Hunter Bates and Hans Rickhoff of Akin Group to discuss the EB-5 lobbying groups active on Capitol Hill. They cover key congressional players in the space, the challenge of reaching a consensus between urban and rural interests, and the impact of the current administration’s overall immigration policy.

On two occasions, the EB-5 industry has gotten very close to passing a long-term reform package, yet we continue to fall short despite the efforts of lobbying groups representing Regional Centers, EB-5 trade associations and coalitions. The challenge lies in establishing a consensus between rural and urban interests and competing with other immigration policy issues like DACA and the border wall.

Akin Gump Strauss Hauer & Feld LLP is an international law firm with 20 offices worldwide. Known for its lobbying presence in DC, Akin Gump is among the most prestigious firms in the US. Hunter Bates is a partner with the firm, and he has 20-plus years of law, policy and advocacy experience, having served as legal counsel and chief-of-staff to current Senate Republican Leader Mitch McConnell. Hans Rickhoff serves as Senior Counsel with Akin Gump, and he is a top lobbyist at the firm. Hans advises foreign sovereigns on US foreign policy matters and counsels clients in understanding the US federal agency decision-making process.

Today, Hunter and Hans join Mona and Mark to discuss the EB-5 lobbying groups working toward long-term reform and reauthorization. They describe congressional understanding the program, highlighting the key players in the House and Senate as well as the ebb and flow of interest in EB-5 overall. Hunter and Hans speak to the challenge of reaching a consensus between urban and rural interests, and they address how following through on proposed USCIS regulations might facilitate a resolution. Listen in to understand how the current administration’s anti-immigrant sentiment impacts EB-5 legislation and the likelihood of additional visas being awarded to the program.