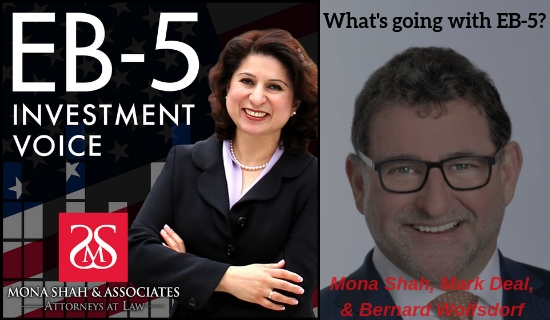 The EB-5 program is experiencing a period of great change. Where can you go for clarification around the new regulations and forthcoming cutoff dates? Today, Mona and Mark sit down with Bernard Wolfsdorf to give us a preview of the upcoming AILA & IIUSA EB-5 Industry Forum. They discuss the key issues that will be covered at the conference, including Final Action Date predictions, the increase in minimum investment for EB-5, and the impact of the latest USCIS policy memorandum.

As the EB-5 program continues to evolve and new regulations emerge, it can be difficult to keep up with the changes. How do you distinguish between speculation and truth when it comes to Final Action Dates? How do you get clarification around the new rules of EB-5?

Bernard Wolfsdorf is the Conference Chairman of the upcoming 2018 EB-5 Industry Forum and past National President of the American Immigration Lawyers Association. He is also Managing Partner of Wolfsdorf Rosenthal, a top immigration law firm with offices in Los Angeles, New York and Shanghai. Bernie was named 2018 Immigration Lawyer of the Year by US News & World Report, he was recognized as one of the Top 25 EB-5 Lawyers by EB-5 Investor Magazine.

Today, Mona, Mark, and Bernie discuss the issues that will be covered at the 2018 EB-5 Industry Forum. Bernie shares the ins and outs of the Visa Bulletin, discussing the countries that currently have waiting lines and those that are likely to receive a Final Action Date in the near future. He also walks us through his Red Card proposal for Indian Nationals and offers clarification around the Child Status Protection Act. Bernie and Mona predict what will happen after the EB-5 sunset date at the end of September and address the expected increase in minimum investment. Listen in to understand the concerns around the latest USCIS policy memorandum and the value of connecting with lawyers, developers and government officials at the 2018 AILA & IIUSA EB-5 Industry Forum.