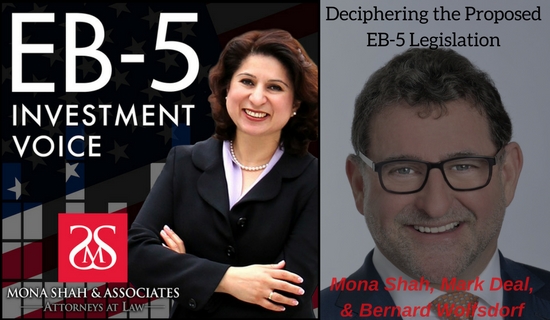 Immigration Attorney Bernard Wolfsdorf joins Mona and Mark to sift through what those proposed changes mean. They address the probable increase of minimum investment, the proposed reforms around set-asides, and the possibility of concurrent filing. They also explore the current climate around immigration in the US and to assess what the proposed changes to EB-5 might look like in practice.

Bernie is the managing partner of Wolfdorf Rosenthal LLP, a full-service immigration law firm with 30-plus years of experience and offices in Los Angeles, New York City and Shanghai. He is a past president of the American Immigration Lawyers Association (AILA), the 2017 Who’s Who Legal Immigration Lawyer of the Year, and one of Lawdragon’s Top 20 Most Powerful Immigration Lawyers. Today he and Mona work through the proposed EB-5 reform, discussing the investment increase, new protections for investors, concurrent filing, and set-asides. They explain how EB-5 uncertainty has affected the market and the 10,000 visa issue. Mona and Bernie end with a dialogue regarding the Trump administration’s latest travel ban, and the necessity for immigration attorneys to adopt a spirit of cooperation in the era of “deny and delay.”

“In the old days, we used to have something called statutes and regulations. Now, it’s called Rule by RFE. We become aware of issues only through the Request for Evidence. We see that the government has now changed their position…” ~ Bernard Wolfsdorf

How EB-5 Uncertainty Has Affected the Market

The Probable Investment Increase in the New Legislation

How the Proposed Regulations Function to Protect Investors

The Effect of Proposed Regulations on Chinese Investors

The Possibility of Concurrent Filing

The Proposed Reforms Around Set-Asides

The Alternatives to EB-5

The Value of Working with Veterans on Difficult Cases

The Deny and Delay Era