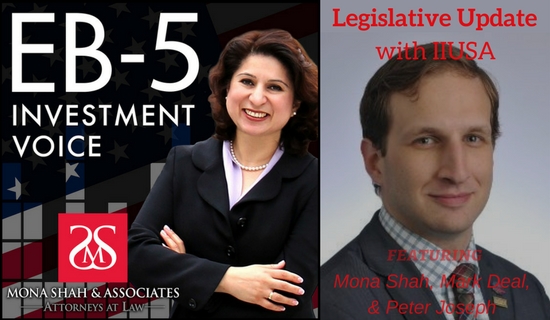 Last week, the US government once again extended the deadline for the EB-5 program from September 30th to December 8th. Mona, Rebecca, and Mark are joined by Peter Joseph, Executive Director of IIUSA, for a status report regarding the progress toward a long-term legislative solution for the program. They explore the role of IIUSA and its influence on Congress, the worst-case scenario imposed by the DHS’s proposed regulations, and the work that has been done in moving toward compromise.

*EB-5 is still evolving. Listen to our show next week for more changes and updates. Subscribe to the show using your podcast player of choice.

Peter also joined us last year to give us an update on what was happening on The Hill.

“Until we have a reform package that is passed by both chambers of Congress and signed into law, we shouldn’t take anything for granted.” EB-5 Investment Voice welcomes its first returning guest, IIUSA Executive Director Peter Joseph, to discuss the most recent EB-5 extension and to give us the most current information on Congress’ progress toward a long-term legislative solution for the EB-5 program. Will this be the last deadline extension? And how close are we to a deal?

Peter has led Invest in the USA, the national trade association for the EB-5 Regional Center Program, since 2010. He has been quoted by major media outlets such as ABC News, Bloomberg Businessweek, The Hill and the Wall Street Journal, among others. Today he shares his expertise with us, discussing the role IIUSA plays as the voice of the EB-5 industry, how key players in congressional leadership have joined the work toward an agreement, and IIUSA’s growing influence by way of comprehensive data analysis.

A couple of mentions are given to the Change.Org petition to increase the capacity for investors. Please consider your support!

The Role of IIUSA

The Progress Toward a Long-Term Legislative Solution for EB-5

The Benefits of Joining IIUSA