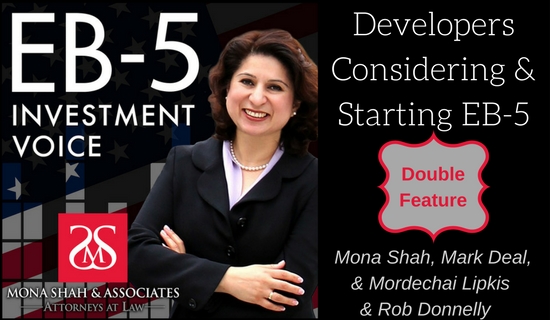 Straight Talk About Starting an EB-5

Mordy is considering EB-5, and Rob is just getting started. They speak candidly about their frustrations with the program – and why they are moving forward with EB-5 despite its complexity.

The best things in life are not necessarily easy, and that sentiment certainly applies to the process of raising capital via EB-5. For all of its complexity, the EB-5 program has significant benefits, and today’s guests each have a unique take on why EB-5 is worth the painstaking work.

Mordechai Lipkis has been in the real estate business for 32 years. He was one of the first developers to convert industrial buildings into residences in the Tribeca and Soho neighborhoods of Manhattan, and he is considering EB-5 to raise capital for a new Hudson Yards project. Rob Donnelly is an investor and entrepreneur with eighteen years of investment management, private equity and corporate board experience. Active in a variety of commercial and residential real estate ventures, he formed the Texas Regional Investment Center in 2014 to employ EB-5 for a boutique hotel development. Today Mordy and Rob share the particular challenges each has faced in attracting foreign investors, what it’s like to compete with the establishment, and how they approach global marketing to raise capital.

The Benefits of EB-5

Rob’s Approach to Marketing to the EB-5 Investor